What is 360 degree feedback

360 Degree Feedback is a process in which employees receive confidential and anonymous feedback from subordinates, peers, direct reports and supervisor(s), as well as a self-evaluation by the employee him or herself. This feedback can also include, when relevant, feedback from external sources who interact with the employee, such as customers and suppliers or other interested stakeholders. 360 Degree feedback, also known as multi-rater feedback, multi source feedback, or multi source assessment, is so named because it solicits feedback regarding an employee's behavior from a variety of points of view.

360-degree multi-rater assessment is more integral for an organization because it addresses some major competencies and provides opportunities for managers, peers and direct reports to evaluate an individual. These results from 360-degree assessments are often used by organizations in making administrative decisions related to pay and promotions. 360-Degree Feedback surveys evaluate employees from different stakeholder perspectives - for e.g. managers, peers, direct reports or even customers. 360-Degree Feedback surveys are an efficient method for employees to receive appraisal (or) performance feedback from the people who work around them. Online feedback forms contain a mixture of questions covering a broad range of workplace and leadership competencies. The feedback forms include multiple questions that are measured on a rating scale. The person receiving feedback also receives a self-rating survey form that includes the same survey questions that other raters received. 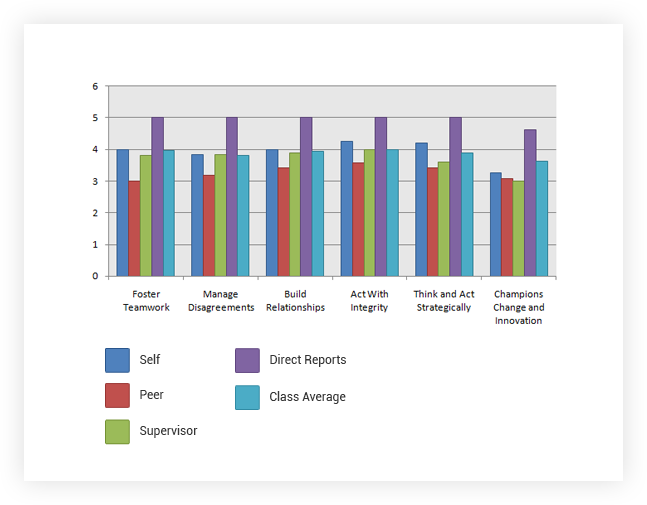 Our 360 Degree feedback report are generated for each individual & these reports consists the following:

The reports are customized based on the organization's needs. Check out the sample report below:.

Ascendus Technologies was instrumental in the design, development, implementation and analysis phases on a large industry survey project we recently conducted. They assigned the most talented, professional software and graphical user interface designers who worked patiently and diligently with my staff and I, to assure a smooth launch - we received many compliments from respondents about the survey design and its user friendliness. Ascendus also used their expertise to design and deliver custom survey business intelligence and report generation software that has many delightful features and flexibility. Thanks for making NCMS look good to our sponsor! Not only were they proactive in helping us anticipate and address potential pitfalls, but also most attentive and responsive throughout the year-long engagement with us. They have my unqualified recommendation.